A Burnaby-based wildlife rescue group is asking people who leave feeders out for hummingbirds to make sure the sweetened water isn’t frozen solid, as the rescue centre is seeing a spike in the number of hummingbirds in distress.

According to Linda Bakker, co-executive director at the Wildlife Rescue Association of B.C., the organization usually sees one or two hummingbirds that need rescuing in a winter month, but eight were dropped off in February during a cold spell.

“They can get hypoglycemic, so they have low blood sugar and they can end up on the ground — which is unusual for them — and they don’t have the energy to fly up,” said Bakker. “They have a high metabolism, so they need to feed constantly.”

She said the birds are too small for the rescue centre’s veterinarians to do blood testing, but once their tiny patients were given some food, the birds’ health quickly improved. 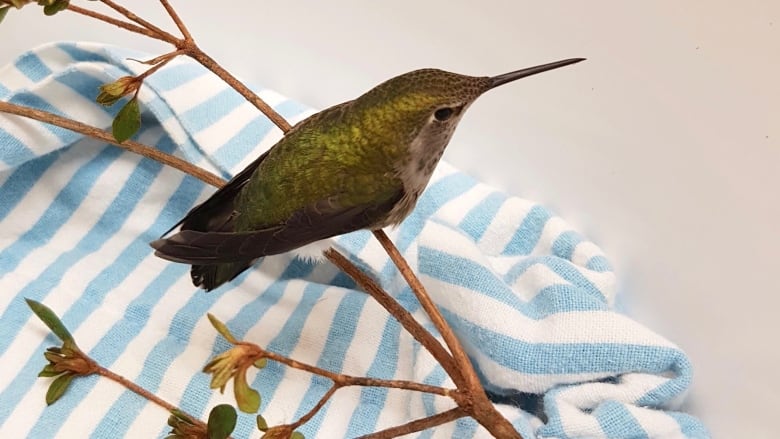 The birds used to migrate, but Bakker said they now stay around the Metro Vancouver region throughout the winter.

“They are surviving in our climate. They are here year round. They’ve adapted to a climate,” she said. “They do rely on people putting out hummingbird feeders.”

Bakker said the natural diet for hummingbirds consists of insects and nectar, both of which are scarce during the winter.

She said anyone with a hummingbird feeder ought to keep an eye on it to ensure it’s not frozen, especially overnight. Hummingbirds don’t feed overnight, but they need to start at the crack of dawn, when most people are still asleep.

Bakker recommends a few different ways to ensure sweetened water doesn’t freeze: purchase a small feeder heater; place a feeder close to the house where it’s a little bit warmer; or cycle multiple feeders in and out of the house to ensure one is always thawed out.

Is there more to this story? Email rafferty.baker@cbc.ca